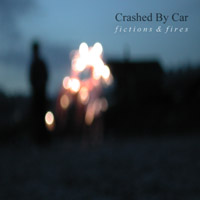 This time round, a debut release from Oregon's Crashed By Car,recent founder of the beautiful Pleasedosomething net.label, and indielectronic star in the making, with net.releases on Kikapu and 8BitRecs, amongst others.

The "Fictions And Fires EP" is a spectacularly well-crafted piece of organic electronics, with highlights including the smooth drift of "Full Speed Dead", the muted triumph of "Bees", and the almost Harold Budd-esque ambient beauty of "Skylight FacingMyself".

It's a sign of the changing electronica scene, maybe, that more and more good artists are coming out of the States to meld organic waveforms with the pure Scandinavian tones often released on Monotonik, and Crashed By Car's idyllic sounds are another blissful step towards unity.

3 - Dollars In Our Jeans

Reviewer: Soonikspeiss - - May 28, 2017
Subject: IDM/post-classical/indie electronic gem
this set of 6 pieces used to silently chug alongside angular landscapes of beats, volatile piano chords and spacey motives. It is not supposed to be a very interesting issue because of these elements being represented only. However, it is an interesting issue because these elements are designed and depicted in a very intriguing fashion. On the other side, it can be called a solid one. One can perceive coherent tie-ups between the aforementioned elements where one can see inner logic and interior power pouring out of it. Elfin and miniature elements are set up in the way to create something stunning in the macroscopic level. Those rusty noises here and there are up there to be a sturdy and caustic adhesive between the sonic blocks. It reminds me of those times in the beginning of the 00s when such sort of sound was very hype-y in Europe thanks to such label as Morr Music. This outing was released at the same time. The issue is a bit of the discography of another legendary imprint, Monotonik.